More of Nature’s treasures in Chiapas

Where do I start? With the aquamarine water flowing serenely over smoothly molded rocks like topping over an ice-cream sundae? With the vibrant pulse of water cascading 30 metres over my head? Or with the startling beauty of Palenque?

The day started with an exciting drive through a switch backed, speed bump covered narrow mountain road. We passed through isolated mountain towns where people still turn to see who is passing by. The villages here are predominantly indigenous and we saw the clothing change to brightly embroidered cotton blouses topped with satin capes. They also use these capes as aprons. Pretty clever, huh?  I wonder if this ever occurred to Superman?

Over three hours we dropped 2000 metres. Instead of pine forests and corn fields, we were surrounded by banana trees and sugar cane. We stripped off a few layers of clothing and began to sweat. This was a treat after listening to our teeth chatter in the cold morning in San Cristobal.

Our first stop was Agua Azul. This is the site of a river that is the most unbelievable colour of aquamarine. As if the colour isn’t amazing enough, the river falls over huge worn boulders creating the most wonderful waterfalls. Usually when I think of waterfalls, words like powerful, crashing, force, come into my mind. But here I thought of soft, gentle, serene, and calm. It appeared like a layer cake with yummy frosting running down the sides!

I had the overwhelming urge to take off my shoes and feel the water between my toes – so I did. It felt like it looked and it was very soothing.

From here we continued on to Misol-Ha. I had never heard of this place, except that there was a waterfall there. I had no expectations, only that I thought I’d see something ‘pretty’. Well, this waterfall took my breath away! 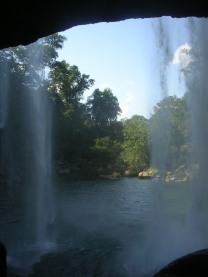 After walking only about 100 metres from the parking lot I was transported into a magical world where Mother Nature is both King and Queen! Like most waterfalls, there is a huge rock wall with water cascading over it, but here the rock face is concave, almost in the shape of a C, so that you can walk behind the waterfall and feel part of it. There are caves burrowing into the wall.

This marvel is surrounded by dense jungle smelling rich and pungent. Huge exotic rainforest trees such as mahogany and teak tower over. For the first time in my life,   I swung on a ‘natural’ rope like Tarzan swung on!

The energy here is incredible. It is alive with the memories of sacred rituals of the ancestors. I had the overwhelming desire to create my own and just stay there.

Palenque is an archaeological site that has always piqued my interest. Because it was hidden in the jungle, but also because it remained hidden for so long. I expected to feel a gut wrenching ‘wow’ at the first glimpse of the pyramids

nestled in the wild dense brush. And this is exactly how I felt. The setting is so beautiful, that the pyramids and ruins are icing on the cake. What I didn’t expect to feel was the complete absence of energy there. This site is abandoned, even the ghosts are gone. It was interesting to see, but I enjoyed being in the jungle more than exploring the archaeological site.

This is what I love most about travelling, there are always surprises. Now that I travel using all my senses instead of just sight, everything is an adventure. Coming home through the dark mountain road the sky was magnificent. I saw constellations that I have never seen before. I felt like I could reach out a grab a star for a souvenir!

Last adventure in Chiapas… the Cave